Today I am so excited to have guest author Anna Staniszewski share great insights on character development. Anna’s finale in her Unfairy Tale trilogy, MY SORT OF FAIRY TALE ENDING, launches next Tuesday, November 5th!

Give Your Main Character a Mirror

When Vonna suggested I write about the character relationships in my books, I realized that Jenny, the heroine of the UnFairy Tale series, spends more time with characters she can’t stand than with those she actually likes. Sadly, most of the creatures she deals with during her adventures are pretty annoying: crazed unicorns, riddle-loving trolls, screaming leprechauns, etc. Jenny does have allies, but often she has to deal with the bad guys by herself.

To me, the relationship between the “good guy” and the “bad guy” is often the most interesting in a novel. In The Anatomy of Story (my absolute favorite book on writing—really, go read it now) John Truby recommends having the protagonist and antagonist strive for the same thing; however, the way they go about achieving that thing is vastly different.

This advice really stuck with me as I wrote the last book in the UnFairy Tale series. I kept thinking about how the two characters in my story are alike, how they could serve as distorted mirrors of each other. That train of thought gave me a lot of insight into the antagonist’s character, but it also helped me to dig even deeper into Jenny’s character.

The “mirroring” idea is especially fitting given that my books are based on fairy tales. (Magic mirror, anyone?) For example, what happens after Snow White becomes queen? Does she eventually turn jealous and paranoid? Does she morph into the type of evil queen she once fled from? Or does she find a way to break the cycle and achieve what she wants in her own (hopefully non-evil) way? Now that’s a story I would want to read!

How do you go about putting mirrors into your own writing?

About MY SORT OF FAIRY TALE ENDING:

Happily ever after? Yeah, right. Jenny’s search for her parents leads her to Fairy Land, a rundown amusement park filled with creepily happy fairies and disgruntled leprechauns. Despite the fairies’ kindness, she knows they are keeping her parents from her. If only they would stop being so happy all the time-it’s starting to weird her out! With the help of a fairy-boy and some rebellious leprechauns, Jenny finds a way to rescue her parents, but at the expense of putting all magical worlds in danger. Now Jenny must decide how far she is willing to go to put her family back together.

Visit Anna’s website for a sneak peek at the first chapter, plus a bonus free prequel, JENNY’S FIRST ADVENTURE! And while you’re there, check out the first two books in the series, MY VERY UNFAIRY TALE LIFE and MY EPIC FAIRY TALE FAIL.

You can join Anna on her tour for MY SORT OF FAIRY TALE ENDING on these blogs:

Previously:
Larissa’s World: The Process of Writing a Series
This week:
Dianna Winget: Is This a Girl Book?
Dani Duck: Interview with Anna
Next week:
Leandra Wallace: Anna Staniszewski and a Giveaway!
Lynda Mullaly Hunt: When Your Hero Wants to Quit
2 Read or Not 2 Read 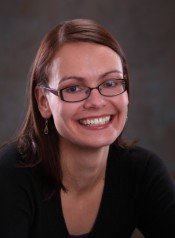 Born in Poland and raised in the United States, Anna Staniszewski grew up loving stories in both Polish and English. She was named the 2006-2007 Writer-in-Residence at the Boston Public Library and a winner of the 2009 PEN New England Susan P. Bloom Discovery Award. Currently, Anna lives outside of Boston with her husband and their black Labrador, Emma.

When she’s not writing, Anna spends her time teaching, reading, and challenging unicorns to games of hopscotch. She is the author of My Very UnFairy Tale Life and its sequels, My Epic Fairy Tale Fail and My Sort of Fairy Tale Ending, all published by Sourcebooks Jabberwocky. Look for the first book in Anna’s next tween series, The Dirt Diary, in January 2014, and visit her at www.annastan.com.

Thanks so much for having me!

Anna, I’m delighted to have you visit!

Warning: Invalid argument supplied for foreach() in /home/vonnacar/public_html/wordpress/wp-content/plugins/email-subscribers/lite/includes/classes/class-es-forms-table.php on line 706