We’re into the slow days of summer for local events, but there’s no slowing down on new book releases and giveaways. Speaking of giveaways, I love the covers on both of Cassie Beasley’s books featured in her giveaways. Be sure to scroll down to see the excellent trailer for Dee Leone’s upcoming release. Two of the birthday books featured today are from friends I’ve met on the SCBWI Blueboard; the other I met in the wilds of twitter.

BACK ON THE MAP

From the publisher: With their mother long dead and their father unknown, eleven-year-old Penny Porter and her twin brother Parker have been bouncing around foster homes for as long as they can remember. Inspired by the historical figures in her favorite book, Penny likes to imagine who she could be related to. Sacagawea? Her genes would be good ones to have. Or maybe Gandhi, or Harriet Tubman. There are endless possibilities!

But while Penny embraces the question marks in her family tree, she and Porter are both ready for a real home. Living with their aging, ornery Grauntie isn’t easy, but it’s better than other places they’ve been, and they don’t want to get moved again—or worse, split up. Penny believes the key to keeping them from being bounced to another new home is getting their town of New Hope, North Carolina back on the state map. And what better way to do that than to spruce up and sell New Hope’s Finest—an old orphanage that was supposed to reopen years ago as the best attraction ever, but never did.

She’s got the creativity and the gumption to do it. And maybe knowing who you are doesn’t matter so much as knowing what you can do. But will that be enough to finally keep her and Parker in one place for good?

See Lisa Ann Scott’s ENCHANTED PONY ACADEMY and a trailer for her SCHOOL OF CHARM. 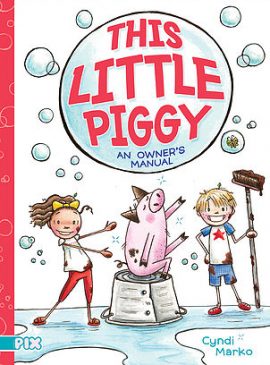 From the publisher: Chuckle your way through this easy-to-read illustrated chapter book about a brother and sister who want a pig for a pet—if only they can convince their mother Have you ever wanted to own a pig, but worried how to convince your mom it was a fantastic idea? The latest Aladdin PIX illustrated chapter book tells the tale of a brother and sister who—more than anything—want a pet pig. Getting the pig—Snowflake—isn’t all that hard, but keeping it clean, feeding it healthy snacks, and teaching it manners and tricks, proves to be more than these kids bargained for.

From the publisher: What could be more fun for kids than to hop like a frog, slither like a snake, and roar like a lion—all while learning an empowering, healthy life skill? Zoo Zen is a delightful pose-along adventure for children ages four to eight. Young readers will join our heroine Lyla as she learns ten yoga poses from her friends at the zoo, receiving helpful tips along the way from each animal she encounters. Using rhyming and counting to make memorization easier, here is an imaginative book that combines the benefits of yoga with kids’ natural love for animals to create a magical learning journey that parents and kids can enjoy together.

Diana Murray’s forthcoming early reader PIZZA PIG has a cover AND is now available for pre-order! Pizza Pig’s pizza parlor is the place to be, where animals can order whatever their taste buds desire. Kindness is on the menu!

Holiday House has bought world rights to the picture book BIG AND LITTLE: A STORY OF OPPOSITES, written and illustrated by Cheryl Pilgrim. The story introduces children to two canine friends, one big and one little, as they embark on a day of discovery while conveying the meanings of opposites.

Diana Murray is running a giveaway for two copies of DORIS THE BOOKASAURUS on Goodreads. A free account is all you need to enter! Doris the Bookasaurus thinks books are mega-dino-tastic! They make her spiky tail wiggle and her imagination soar.

For one more week, you have a Goodread’s chance to win a copy of Cassie Beasley’s MG novel CIRCUS MIRANDUS! Invisible tigers, a flying Bird Woman, the mysterious Man Who Bends Light–Micah loves his grandfather’s stories about Circus Mirandus. Now, with Grandpa Ephraim’s life on the line, Micah must make his own journey to the circus in order to call in a favor from the most powerful magician of them all.

For a month, there’s also an opportunity to win an ARC of Cassie Beasley’s upcoming MG novel, TUMBLE AND BLUE!  Set in the Okefenokee Swamp, this story is about a girl called Tumble, who wants to be a hero, and a boy named Blue, who wants to be a winner even though he’s been cursed to lose at everything from tiddlywinks to tic-tac-toe. The two of them team up one summer to fight their terrible fates and face off against an alligator who isn’t quite what he seems.

Dee Leone’s fall release picture book DOUGH KNIGHTS & DRAGONS has a fun trailer to whet your appetite! The story is about a dragon and knight who share a secret friendship but are bound by law to fight in an upcoming tournament. If you’re on twitter, retweet this book trailer link about the book giveaway for a chance to win a copy of the book! Illustrations are by George Ermos. The trailer is below.