Customer states they have changed the light bulbs in the closet but they still don’t light.

During the interview, customer also states that the ceiling fan and light in that bedroom stopped working some weeks ago.

Customer also states that the iPhone battery charger and laptop chargers stopped working, too. Had not mentioned that either.

Checked the non-working outlets. The chicken stick shows 120vac at both Hot and Neutral sides of the outlet. Really?

Let’s test an outlet outside the room. 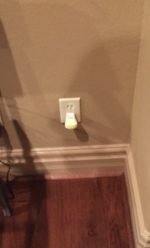 Now let’s go check the outlet where the iPhone and laptop chargers were not working. 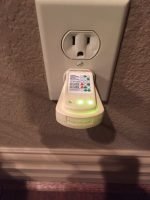 Tilt!  Reads Hot/ Ground reverse. That doesn’t sound good, but can’t be as this has worked for months.

This reading can also be caused by an open Neutral. 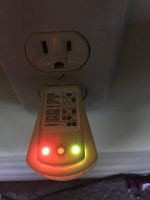 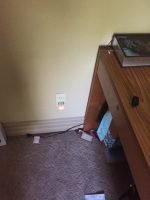 Somewhere there is a Neutral not connecting, anymore.

Plugged a test light into the non-working outlet and started banging on the walls near all the outlets. No change.

Opened up the wall switch for the closet and pushed on the Neutral wire nut. No change.

Opened up the wall switch for the hall area just inside the bedroom, which works, and tugged on the Neutral wire nut.

Bingo, the lights in the bathroom around the corner started flickering. The test light flickered, as well.

Opened up the light switch in the bathroom, which worked.

Bingo again. This time, the bathroom lights were ok, but the test light and the closet lights flickered.

The switch by the door affects those items, plus the lights in the bathroom. 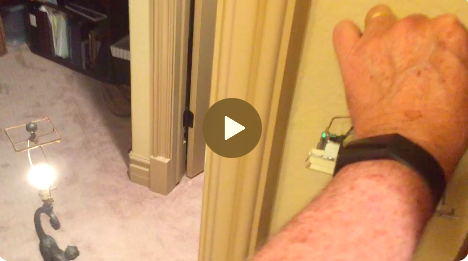 So yes I flipped off the breaker. 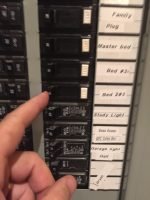 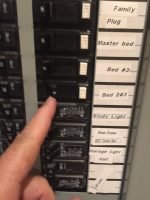 … and yes I used a chicken stick to be sure it was dead.

Now I can get in there and see what we’ve got. Hmm, one of those Neutral lines is sticking out of the wire nut.

Wire nut off. That one Neutral wire was barely in there.

Look at this. The apprentice stripped one line really far but that was not the one which was showing copper outside the nut. It was keeping the nut from going down all the way.

Here the wires are straightened a bit and I sanded them bright again. Then trimmed them to be the same length. 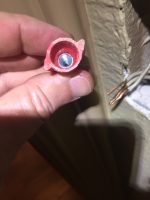 Reinstalled the wire nut and then used needle nose pliers to pull each wire to see if they were loose.

Here is the one in the bathroom. One of the Neutrals is just barely in there. It was no longer making contact. 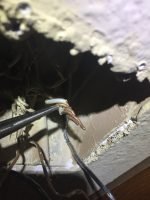 Back together and tested with needle nose pliers again.

I figured it out.

If no current flows through a resister, what is the voltage drop across that resister?  V=iR

So where a bulb is threaded into a socket, Hot and Neutral are connected but since no current can flow because the Neutral is open, the voltage difference of the Hot terminal and the Neutral terminal is zero, therefore they are equal, at 120vac to ground.

If the ground and Neutral are connected the GFCI trips the breaker. 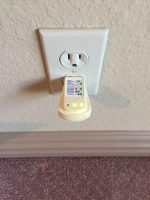 Next project. This light bulb is burned out….

Q: How many electrochickens does it take to change a light bulb?

A: Just the one, but it takes two weeks just to bring it up to code.